Not So Humble Beginnings 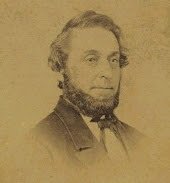 Shelbina itself is a small town located in northeast Missouri.  For a small town, it has had several noteable residents.  Many people would recognize former resident Sam Walton of Wal-Mart fame, but perhaps the most enduring historical figure is actually a gentleman by the name of John Forbes Benjamin.  My introduction to this man was not with a handshake and a conversation but an equally personal experience... my wife Marilyn and I now walk the floors of the mansion he once called home.

Mr. Benjamin was no run-of-the-mill Shelbina resident.  His colorful history is paralleled by this ornate structure he built in the late 1800's, originally known as Vesper Place.  In search of a peaceful setting for he and his wife he commissioned the build but continued to travel to and from Washington, D.C. where he served in Congress.  The peace he enjoyed was short-lived as only two years after the homes' completion he passed away.  To add a bit of intrigue, his passing occurred just after having rewritten his will and his wife, who spent more time in the home, passed away shortly after.  But that's not all... the estate soon fell into a long and colorful probate due to the interest of a beautiful young "girlfriend" of Mr. Benjamin's from (you may have guessed it) Washington, D.C.  This story still echos through Shelby County today and pre-dates current Washington political scandels by over 100 years!
As for Marilyn and I, what we thought to initially be the purchase and restoration of a beautiful home turned into a wonderful chain of stories from former owners and the community that has grown to love what they call "The Benjamin House".  As these facts come to our attention, the sometimes overwhelming task of restoring/maintaining the residence becomes even more dear to us.  If life has shown me anything, it's that important work is rarely easy!
Technology has changed since the times of Mr. Benjamin.  I imagine a blog written by him would have been an avidly read site!  Our desire in starting this one is to share the story of this great home.  We hope that it will lead to a better understanding not only of its past but the Benjamin family as well.  Stay tuned for more tales of the home built by the 49er, civil war general, congressman, lawyer, philanderer, and survivor of several brushes with death!
For more photos and information feel free to visit our homepage at http://www.shelbinamansion.com/!