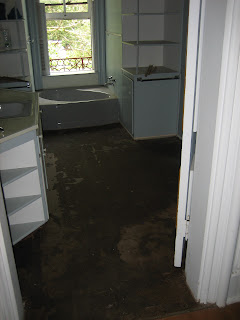 It sounds simple enough, but I must confess to my lack of skill in this area.  We were working on restoring the east bath upstairs and Dennis of Snyder Plumbing was helping.  In fact, I was helping and Dennis was the brains of the operation.  You must understand that we found many water lines that had broken due to freeze up during some previous winter.  Dennis found all the breaks that we could possibly see and did a great job of repair.  It came to "test time" and he turned on the water to the house and watched on the first floor while I watched the second floor.  All went well until I heard running water and someone yelled on the first floor.  Water was pouring out of the chandelier in the parlor and the chandelier in the main entrance hall.  It takes considerable time for water pressure to relax and all we could do was watch and hope until the flow stopped.  We looked at each other and went upstairs to search out the break.  Well, the breaks were well hidden under the flooring and under a bathroom vanity built in the 1950's.  The first break we found by looking in an old electrical access panel over the parlor chandelier.  The second was found by eliminating all the other possibilities and taking a guess, which wa 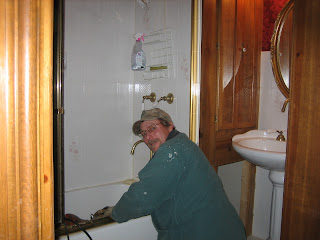 s confirmed when we tore out the bathroom vanity.  Bingo, spit copper tubing was found and repaired.  Since we had started the bathroom restoration, I asked
Dennis how to remove the tub.  My suggestion was to use a saw's all.  The tub was blue and I assumed that it was made of fiberglass.  Dennis is a very understated person and he sounded like the actor Jimmy Stewart.  "Well, if it were me, I would close this bathroom door, see? "  I nodded.  "Then, I would put on some safety classes."  He paused to see if I grasp the concept, and I nodded.  He asked if I had a big hammer and, like a bobble head, I just kept nodding.  Then with a sly, but gentle smile he said, "hit that bathtub with the hammer until she breaks into a lot of little pieces"!  I told him that it would be almost a sin to destroy a tub in such good condition.  Couldn't we just remove it and slide it out the door to the porch and give it away?  Dennis went back into his Jimmy Stewart, "Well, yes we could, but that tub probably weighs over 400lbs"!  A vision of it chasing me down the stairs and crashing through a wall lead me to accepting the advise of Dennis.  So, I called Kyler (Big Hammer) Rash and we did some sinnin' on that tub and threw 400+ lbs of cast iron out the window, and over the porch roof to the ground.  Man, Kyler can swing a hammer!!!! 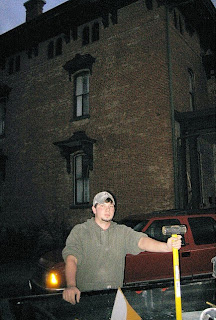